Defying societal pressure and convention to follow her dream, Sonali Banerjee from Allahabad was the first Indian woman to become a marine engineer.
Whether aboard trans-oceanic cargo vessels or sturdy inshore tugboats, Indian ships’ crews and officer supplements are mostly made up of men. And if you’re finding a woman on board, she’s probably gone a memorable way to get there.

The woman was Sonali Banerjee, India’s first woman maritime engineer. And this is her untold story. 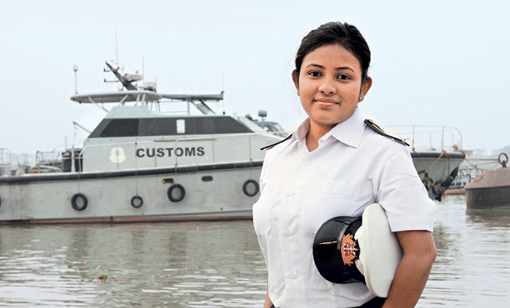 Born in Allahabad, Sonali had always heard the call of the deep. As a little girl, she loved poring over pictures of swanky port cities and tropical islands. Furthermore, her uncles served in the merchant navy and it was their tales of the sea that ingrained in her a desire to become a globe-trotter with a ship of her own.
Years later, ignited by this vision of “seeing the world,” a teenage Sonali enrolled in a four-year marine engineering B.E course at the Kolkata Marine Engineering Research Institute (MERI), located in Taratala.
But Sonali was made of stronger stuff and stood her ground to join the course. Once there, she threw her heart and soul into her studies. Soon enough, she had won the respect of her fellow students. After that, things went smoothly at MERI.
Interestingly, such was the uproar caused by Sonali’s admission at MERI in 1995 that the premier institute did not know where to put its only female student! After much debate and deliberation, she was given a place in the officers’ quarters.
Sonali passed from MERI in 1999 as the first woman marine engineer in India, the only girl among 1500 cadets. Soon after, she was selected for a grueling six-month pre-sea course by Mobil Shipping Co. This hands-on workout took her to Singapore, Sri Lanka, Thailand, Hong Kong, Fiji, and Australia ports.
Having passed this crucial course, on August 26, 2001, Sonali made history when she boarded a Mobil Shipping Co vessel and officially became the first Indian woman to take charge of a ship’s machine room.
Sonali’s trailblazing journey opened a new chapter in the history of India’s maritime industry. The most remarkable fallout was the interest and enthusiasm it sparked for seafaring among girls across the country.